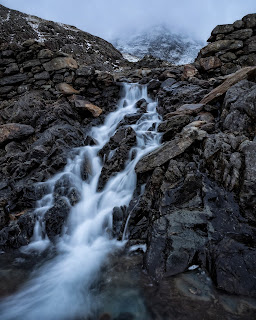 Oh no! The alarm hadn't gone off - I'd overslept!

Except I hadn't. I'd just dreamt that I had. This recurring (and very irritating) dream plagues my sleep whenever I have something exciting or important to look forward to the next day. And I certainly had something to look forward to. Even the thought of a 3:30am wake up and a long drive were not enough to dampen my spirits.

I dragged myself out of bed after what felt like a woefully inadequate sleep; that dream has a lot to answer for! My kit was all packed and stacked ready to go. After well over a decade of procrastination I was finally heading to Snowdon.

Having double-checked and loaded my kit, I left home and headed west for the Welsh border. On my drive I listened to the audio book of that classic tale of British wilderness (albeit Scottish rather than Welsh wilderness) 'The 39 Steps' by John Buchan. The sky was bright with a nearly full moon, although I knew that clouds were forecast to be my fate as my journey progressed. 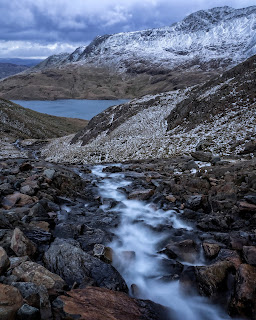 Sure enough shortly after I crossed into the land of the Red Dragon the clouds blocked the moon as completely as if I had driven into a cave, limiting my view of the wider world to the reach of my headlights for the remainder of the trip. I made good time across Wales - at that time of morning traffic isn't exactly heavy - and arrived at Pen-y-Pass car park and the proper start of my days adventure at about 6:30am.

Here I listed my spare kidney on Ebay to fund the parking charges, donned my warm clothes and a head torch and rechecked the map of my route. When I initially started planning for my trip to Snowdon I had hoped to complete it in milder weather and follow the Snowdon Horseshoe route, along two precarious ridge lines up to and back down from the summit. When I learned that there was sure to be snow on the higher ground, and that I would need to start my ascent in the dark because of when I needed to get home, I shelved that plan for a later day. The revised plan was to get as far into the ascent as possible as quick as possible in case there was a sunrise worth photographing. So I settled on the broad and well surfaced Miners track and started on up.

The thick cloud still obscured the moon, and sunrise was still over an hour away so I began in total darkness with no view ahead, but I knew that the mountains towered ahead of me. Soon a few chinks opened in the cloud letting through the first hints of dawn and giving me enough visibility that I could turn off my torch. As my eyes adjusted to the new, lesser darkness I could make out a snow capped outline ahead of me! I assumed this was Snowdon and smiled to myself, my goal was in sight - I was wrong though. What I could see was just a part of the ridge, some 300m below the still cloud bound summit. 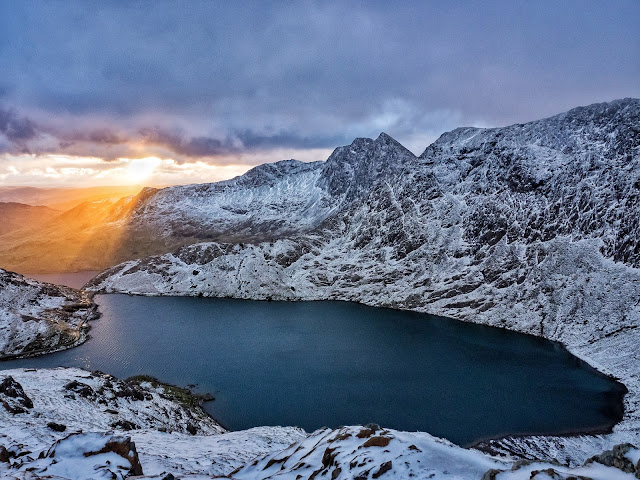 The Miners track is straight forward and easy going until the far side of Llyn Llydaw where it gets a little steeper and rougher, but it is above Glaslyn that the path, and the view, starts to get really interesting. This is about 2/3 of the linear distance into the route, but only 1/3 of the vertical ascent, leaving a steep route to negotiate over the last few kilometres. It was also around this point that the laying snow became persistent and the rising sun started to break through a chink in the low hanging clouds. The combination of cool blue lake, majestic snowy mountains, broken cloud and warm sunlight made for a breath taking view!

But the concept of 'a view' was about to become irrelevant. The laying snow and the lowering cloud merged into a wall of white before me. I lost the route of the path in the snow several times and struggled to gauge how much further I had to go. I couldn't see the track 30 meters ahead at times, let alone the summit. The wind driven snow had done a comprehensive job of smoothing out the hill side, blending series of steps into smooth icy slopes. With the aid of poles and studded snow walking aids (proper crampons don't feature on my kit list yet) I made it to the summit ridge feeling in my inexperience as close to a proper alpinist as I've come yet, with just a short walk along the ridge remaining to arrive at the actual summit. 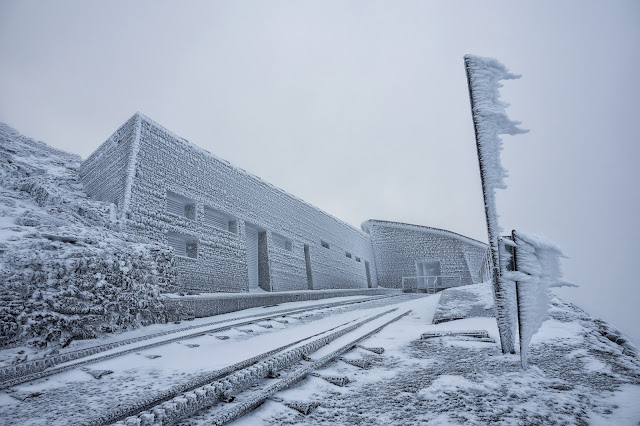 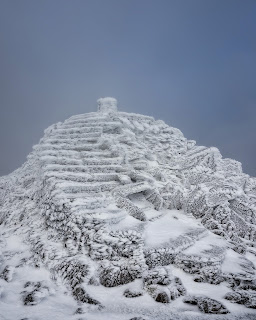 The ridge looked alien! The frigid temperatures and driving winds over the preceding days had sculpted icy feathers over every inch of it. Snow remained only in the most sheltered of spots, the rest blasted off by howling winds. The swirling ice traced the eddies of the wind as clearly as smoke in a wind tunnel and coated the entire landscape, with only the dark rocks beneath breaking the white of the ice. The now brightening cloud still firmly clamped on top of the mountain cast a flat, contrast-less light uniformly over the ice-coated everything and created conditions unlike anything I have seen before - a completely monochrome landscape.

The summit cairn and trig point looked like a chaotically iced wedding cake, and the deserted train station like a movie set from 'The Day After Tomorrow'. I was the first to the top that morning - no one else had been crazy enough to start out for the summit as early as me - and the solitude was palpable, although short lived. A trio of walkers had been gradually catching me for the past hour while I kept stopping to take pictures and they arrived just a few minutes later. I'd like to think that pioneering a path through the fresh, unsullied snow for them had slowed me down, but the reality is almost certainly just that they were faster than me! 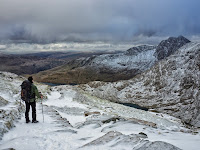 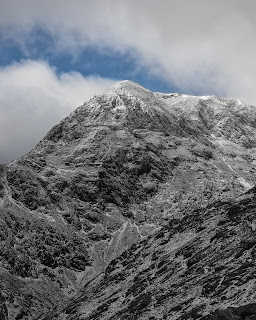 I didn't stay long at the top. I had made my pilgrimage, had my adventure. Call me anti-social but sharing these special places with throngs of other people spoils it for me. More often than not it is the solitude itself that I am seeking, and the personal challenge of completing the ascent in the first place, the views are a bonus, but a very welcome one when they are there! Sure enough I passed many other hikers toiling upwards while I descended, but even when the cloud lifted and the iced-gem summit appeared against a bright patch of blue I didn't envy them, because they had to share it, and I had had it to myself, if only for a few minutes. 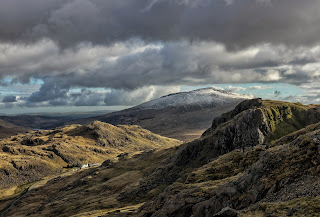 Now that the clouds had lifted and the sun was properly up the views on my trek back down were every bit as stunning as you would expect of the Snowdonian Mountains in winter. Snow capped peaks were there to be seen in every direction and the low winter sun picked out the finest of topographical details in a landscape which begs the question why we Brits ever feel the need to travel abroad to see beautiful scenery. I made it down about 5 hours after I originally left the car. I shed my cold weather kit, now feeling distinctly over dressed among gaggles of children and young couples who at midday were only just arriving. I left quickly, keen now my adventure was over to get back to my family for the remainder of the day. A few miles away I had to stop and take in the view behind one more time. The clouds had now lifted fully and the snowy summit of Snowdon had revealed herself to all the world. It was the perfect parting memory, one that is certain to bring me back again soon. This may have been my first visit to Snowdon, but it won't be my last! 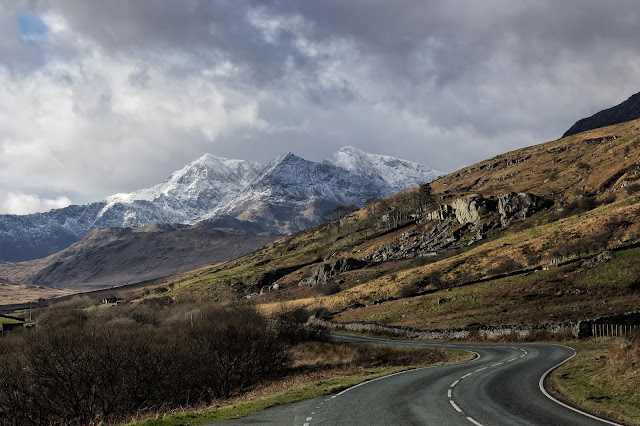