The Best Books: Rob Penn - The Man who made things out of trees 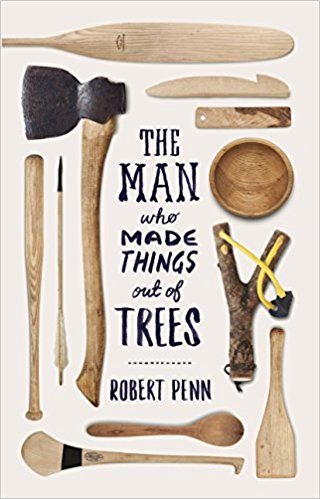 I think anyone likely to be reading this will have gathered by now that I love the natural world. For the avoidance of doubt: I LOVE it! Everything about it.

One aspect of my enjoyment of the natural world that I don't often talk about is working with natural materials. While my skill level is very low (hence not talking about it much, but perhaps I should mention it more - watch this space) my enjoyment of working with natural materials, primarily wood is huge. The process of making the few things I have managed to construct from scratch has been addictive; the satisfaction of producing something functional (rarely beautiful from my hands) from something natural is not to be under-estimated. I am fascinated by the unique properties of natural materials, their frequent lack of uniformity. More often than not the best way to make the most of the material is to work with its individuality rather than in forcing your own will upon it and that requires consideration and problem solving.

I first came across Rob Penn when I saw his documentary series on BBC - Tales from the Wild Wood - the story of his project to rejuvenate an old, unmanaged woodland near his home. I was fascinated - I've always loved the idea of woodland work, coppicing and felling trees, splitting firewood, using the harvested material to make and sell things of value and function. I was envious of Rob to say the least, and ached for an opportunity to be involved in something similar myself. So a few years later when presented with an opportunity I did so - setting up The Riddy Wood Project with my brother (more on that another time).

Since that time I've seen glimpses on social media of Rob's involvement in the Small Woods Association, Woodland Trust and similar campaigns promoting sustainable use of British woodlands and trees. As soon as I heard this book was to be released I knew it was one I would like to read - and I did.

There are books which cover a broad topic with a light touch approach, providing for the reader only a scratch-the-surface-deep knowledge of many aspects of the subject. This is not ones of those books. He has taken one, very specific subject - the Ash tree - and drilled deep down to the depths of what there is to know. From the trees biological traits, its geographical distribution and physical attributes to its historical significance and use, and its modern day relevance, Rob has clearly delved deep and provides a fascinating, educational and easily readable account of his journey of personal learning and discovery into the Ash as a tree, a material and a symbol. Literally travelling across continents to fill gaps in his understanding he has left no stone (or perhaps leaf would be more appropriate) unturned in his account of how, what and why the ash holds a special place in his heart, as well as in the hearts of many others across the world.

In doing so he has also opened a doorway into the world of traditional craftsman and skills fighting to remain relevant in a mechanised and hydro-carbonised global economy. What place does a hand turned ash bowl or a steam bent ash chair have in this mass produced, throw-away society? It's place is the one we make for it - these skills will die once and for all if the people who appreciate the tradition and the talent and the art behind them dry up and turn to anonymous and soul-less alternatives. These sort of items aren't the cheap option any longer, but they are are more than just the sum of the parts of which they are constructed or formed; they are a symbol of what has gone before and an icon of what can yet be a sustainable and effective and viable and beautiful resource going forward into the future.

In case you hadn't already cottoned on, I would thoroughly recommend this book to anyone. Whether your interest lies in the historical, the ecological or the artistic, in engineering, in traditional rural crafts or in general knowledge and interest; there will be something of interest to you.