** We try to  set aside one day a month for us as parents to spend one-on-one time with
our children - having only two children at present the numbers work out neatly! ** 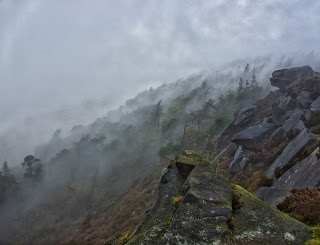 The plans had been made, the kit gathered, snacks selected, 'Rhino the adventure wagon' locked and loaded and we were half way to Kinder Scout in the Peak District National Park. A familiar route for me, as it is also my daily commute. This was to be Megan's first 'big hill' experience because she has been asking recently to climb a big mountain, and specifically 'the 4000 foot mountain' (Ben Nevis). I had informed her she would need to do some training for that, and thus the plan had been born to climb the highest hill in the Peak District. 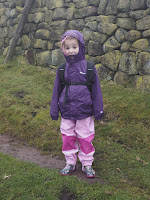 However, as we were passing Ramshaw Rocks, just east of the Roaches and barely visible off the A53 in the swirling mist Megan piped up - She recognised this place. This was where we had been with Uncle Rob and Aunty Serena. She liked it here. Could we stop here instead please? 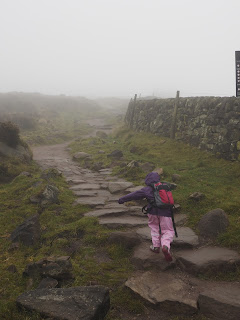 So we did - it saved us almost 40 miles of driving off our round trip after all. We continued round to Roach End at the far west of the ridge. Having always walked it from the east before that day I thought even a slight change of scenery would be welcome, not that you'd ever get bored of the Roaches I suspect!

The weather was ... sub-optimal. The cloud was down, the wind up and the rain persistent enough that we were getting wet from the get-go, but Megan lapped it up. She loved clambering over the various rocky tors and outcrops, peering down over the edges to see what was below.
(Luckily, on this occasion, she was also very good at following instructions, because some were high enough to be extremely unforgiving of slips and trips near the edge!)

She wasted no time negotiating when the sweets were going to make an appearance, and spent a large chunk of our time out that day clutching a slowly dwindling bag of midget gems - I managed to persuade her that the chocolate would suffer as a result of similar treatment so that stayed in the bag! 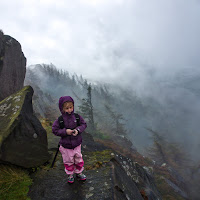 To anyone who has been to the Roaches no explanation is necessary of how impressive they are; to those who haven't, my inadequate vocabulary isn't going to do it justice, so I've thrown a few pictures in.

It is a spectacular grit stone ridge, with frequent rock outcrops along what is in reality more cliff edge than ridge for most of it's length. I thoroughly recommend a visit at some point, whether as a keen walker, casual observer or more daring rock climber it holds something worth experiencing for everyone.

Peregrine Falcons have nested there regularly in recent years, and Staffordshire Wildlife Trust, who manage the site, set up a Peregrine Watch station near Hen's Cloud (at the eastern end of the ridge) to give visitors views of these awesome birds of prey. 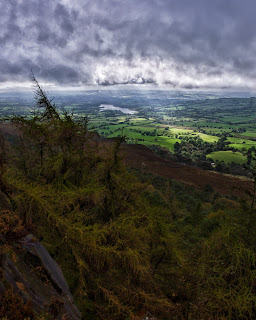 Megan loves it there - the combination of rocks and slopes, stunted trees and huge views to the south over the Staffordshire moorlands are stunning - when the cloud base allows - and we will certainly keep coming back. Another definite area to take a look at is Lud's Church to the west. But we've been there recently for a family trip so I'll save that for another time.

Eventually the cloud lifted giving us those aforementioned views South, down towards Tittesworth Reservoir and beyond. With the lifting cloud the wind eased and the rain stopped which made out return trip along the ridge back to Rhino more enjoyable.

Most importantly, Megan had a great time and we got to spend some time together out and about - she also started her Ben Nevis training, although I think we have a little way to go just yet. We are planning to go up to the Isle of Skye next year, which would be a prime opportunity to stop of at Fort William on the way past, but... we will have to see.