**I have no intention of turning this into a car review blog, but these are Land Rovers, come
on, special case - the go-to tool for conservationists and adventurers alike for decades!! **


As a patriotic Englishman, there are certain nonnegotiable loyalties - Fish and Chips, Full English Breakfasts and Land Rovers among them. That last national requirement comes pretty easily to me, I've always loved Land Rovers. I still have the small toy Defender I played with as a small boy, now a bit rough around the edges - like real Land Rovers of its vintage - but still going plenty strong enough for my young son to play with at present.

I've come a fair way since the dinky toy, via poured over brochures and magazines, unrealistic and as yet unfulfilled dreams of a suitably utilitarian and perpetually muddy Land Rover gracing my future drive way, through to a poor mans Defender (Suzuki) a full 10 years after I learned to drive. But I did end up choosing a career that would, I hoped, on a relatively regular basis send me to places where Land Rovers are in their element. So far the plan has worked... a bit. I've driven various Land Rovers over the past few years, among other makes and models, and relatively often 'off road' - off metalled roads at least. 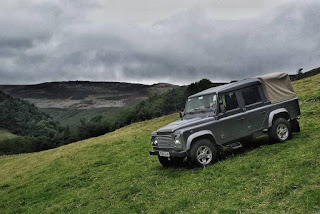 A few weeks ago I found myself reversing up a very steep, grassy slope in a double cab Defender 110 with 250kg of water destined for a conservation contractor in the back. (It handled it easily by the way, and it felt REALLY steep!) Looking across the deep-cut, wooded valley bottom from the cab, I thought to myself that this wasn't such a bad day 'in the office'. (I changed my mind a little later after carrying the water the rest of the way up the hill!)

What made this particular day in the office even better is that the next day I wasn't going to be in the office at all, because I was going to the Land Rover experience centre at Peckforton Castle in Cheshire.

Like many other fans will have done, when news of a new Land Rover model was released, in this case the new Discovery, I signed up to be 'kept up to date on developments' - in all honesty I was just after another brochure of another vehicle I couldn't possibly afford to idly flick through and then discard. But back in June I got an e-mail which seemed too good to be true: 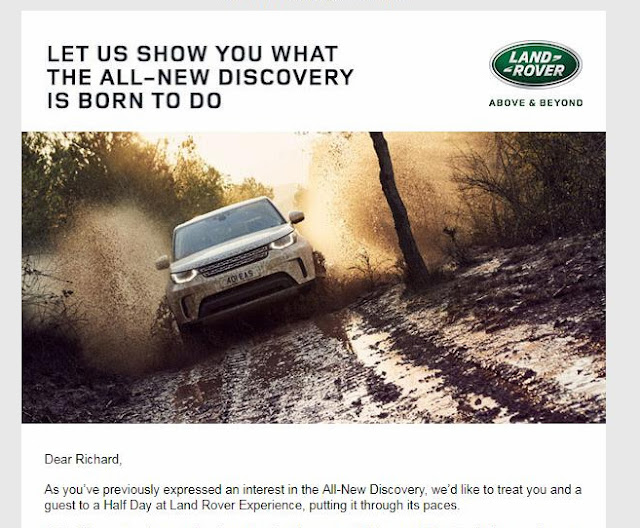 Well, it may as well have been signed with lots of love, because that's how it felt!

I triple checked the small print for the price, but no - Land Rover really were giving me (and a guest) the experience session for free! Arrangements were made, a date was set, my guest invited (thank you for keeping me company and having fun, beautiful wife) and eventually the day dawned wet and grey. Perfect - more mud! 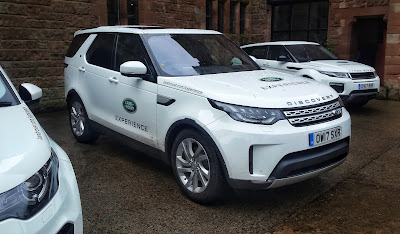 We drove it round the tracks at Peckforton for several hours: muddy tracks, deep water, steep hills, ruts, wheels in the air, the works. And it ate it all, never mind for breakfast, without even waking up - it was incredible. The technology is phenomenal - HDC, ATPC, Terrain Response 2. I didn't even notice the Air Suspension raising the ride height. The sheer number of buttons is bordering on intimidating. And then there is all the automated cleverness. Add to that supreme comfort, limousine refinement (at least so it felt to my limited experience of premium vehicles), the gadgets, screens, cameras, everything - the head up display was a particular favourite of my wife. Oh, and I could definitely get used to an automatic gearbox.

If someone were to hand me the keys and tell me to drive off into the sunset, which to be fair is almost what Land Rover did for half a day, I would thank them and do exactly that, with barely a backward glance.

... I'm pretty old school in my tastes. I love the Defender. I have always loved its determination to retain function over form. And frankly, for me, in terms of looks it still beats all of Land Rovers current models hands down in its unashamed, utilitarian uniqueness! The only control at your disposal to alter the performance ready for an off tarmac adventure is a large, clunky lever which needs manhandling into position. I love the way that in low-range first gear it will do almost everything the Discovery can do with all its electro-trickery - that is to say it will slowly, patiently, crawl up or down, over or through almost any obstacle you care to point it at.

... it doesn't do it comfortably, or quietly. I couldn't in all fairness subject my family to the discomfort of living with one, because no matter how much you love them, you cannot deny that they are as crude, unrefined and uncomfortable as a daily driver as they are unparalleled and unstoppable off road. In fact to be brutally honest, I enjoy driving the 2016 Defender at work, because it makes my 13 year old, well used Suzuki (poor mans Defender remember) feel refined, comfortable and quiet.

And yet there is a certain something about them. Drive a Defender in the British countryside and you are an instant local, a stranger with a familiar face. Wave to villagers as you drive through a village you've never been to before and they will wave back - they really do, I've tried it. There is no other vehicle that has quiet the same familiarity or popularity, despite being 30 years out of date when production ceased.

The Discovery is worlds apart; unquestionably a 'better' vehicle than the Defender as far as facts and figures go, and undoubtedly a great vehicle in its own right. In fact, based on my very limited but very enjoyable experiences, it may just be that the only thing wrong with it, is that it isn't a Defender.

Unfortunately for me, or perhaps luckily because it means I'll never have to chose, there is one flaw which both share which makes a large proportion of what I have just written irrelevant. I can't afford either.

So to close, I want to reiterate my thanks to Land Rover for:
Firstly, kindly offering us such an enjoyable half day (the whole team were great by the way, we were made to feel very welcome, and our Instructor felt like an old family friend by the time he was through helping us make your lovely, new, shiny Discovery muddy) and,
Secondly, for making vehicles worth writing about for the last 60 odd years - please keep it up.