**I am very tardy with this one - catching up from early July - its a bit long winded to, but it was
a three day trip so hopefully that's OK? Anyway, I posted loads of pictures from my trip to Latvia
for work, and this is the story behind those pictures plus a few I haven't shared yet**


4am is an offensive hour to be woken at the best of times. When it is preceded by an exhausted collapse into bed after 2am it is borderline criminal. Despite this, I dutifully heeded the alarm, rolled out from under the oh-so-comfortable duvet and collected the pile of neatly organised gear I had packed just a few hours before - very quietly. Waking a wife and two young children at that time of day is criminal!

10 hours later I was 1045 miles away (as the 737 flies) looking down on this: The Great Kemeri Bog in Kemeri National Park, Latvia. 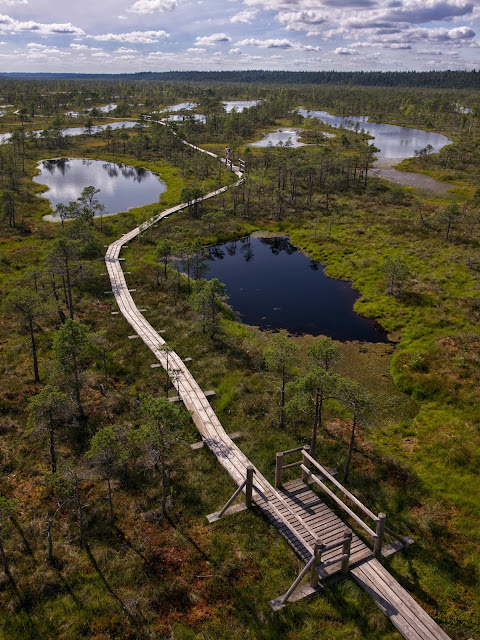 I'd travelled by car, then bus, then plane, then another bus, then train and finally on my own two feet for the last few miles to get there. But when I got there... what a view and what a place! 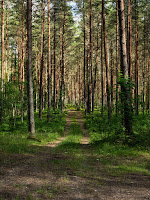 Latvia's wild places definitely made a good first impression on me. This was my first trip to the Baltic and I didn't really know what to expect. Even as I was flying in over the Baltic Sea looking down on coastal lagoons, sandy beaches and thousands upon thousands of acres of forest I had already decided that this was my sort of place. 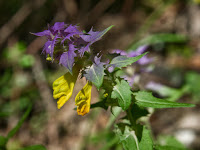 I had come to Latvia to attend the International Conference on Conservation and Management of Priority Wetland Habitats run by the Wetlands Life + Project and hosted by the University of Latvia. But that didn't start until the following day and I'd had a free afternoon gifted to me by my flight times so decided to use it wisely, and get a head start on the theme of the conference. 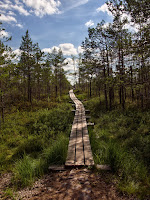 I'd picked out Kemeri after a bit of 'googling' (possibly the best adventure planning tool in the world) and figured out that I could get out there and back in the time I had... if I walked fast enough. The train ride out from Riga clearly illustrated that I was a long way from England! 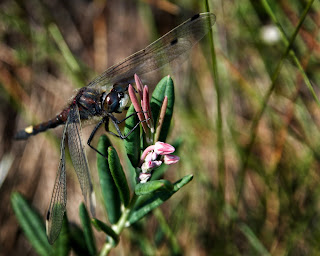 The train was out of the capital city and into greenery in just a few minutes. Along the track people were foraging for wild food; young lime leaves, meadow-sweet flowers and mushrooms among the harvests I recognised. It's pretty unusual to see people in the UK foraging these days, but here it was obviously still a part of peoples routine. (By the way, the train in Latvia is ludicrously cheap - I did an almost 100km round trip for less that €4 return!) 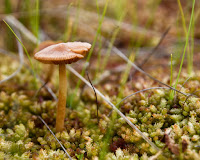 Wood was an obvious and common theme. Not just because the train passed seemingly endless forest, but the houses, train stations, barns and other buildings along the route were built almost exclusively from it. Neatly stacked piles of firewood were obvious in most gardens. I got off the train at a station flanked by woodland and walked the last few miles to the start of the Kemeri Bog boardwalk (made of wood), again flanked for most of the journey by woodland, accompanied by darting dragonflies, and passing myriad wildflowers, many of which I had never seen before, and pollinators aplenty along the road verges. 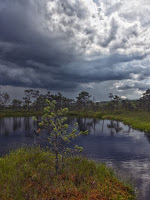 The bog itself was awesome, literally. My job involves restoring upland blanket bogs in the Peak District National Park and South Pennines in North-West England. There, seeing Sphagnum moss, the building block of peat land habitats, is still a relatively big deal because decades of atmospheric pollution more or less wiped it out. Certainly seeing a carpet of it even just a few meters square is a rare occurrence. A major focus of our work is increasing Sphagnum abundance across our work sites. 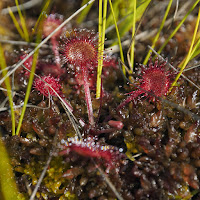 Stretching out before me were thousands of acres where the vegetation was comprised of around 90% or more Sphagnum species. To those of you thinking, 'Yeah... And?', we are missing this in the UK, because we've ruined it all. This was the first real opportunity of my lifetime of enjoying the great outdoors, to see what these habitats can be like when they are still in prime condition, and I was blown away. 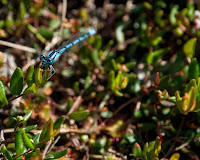 Because of the wet, acidic conditions in the Bog (or is it 'on' the Bog? Whatever...) any trees which get a foot hold are stunted and sparse, rarely growing very large, setting the area apart from the mature. high canopy forest surrounding it. Many die young and eventually fall, but the unique soil water chemistry created by the antiseptic, acidic qualities of the sphagnum means that they never really rot. Indeed that is how peat is formed, organic matter accumulates year after year, not able to decompose due to those unique chemical conditions. The successful vegetation is therefore pretty specialised; carnivorous Sundews, Bog Rosemary and dwarf shrubs. Lichens coat the trees in the clear air away from major industrialisation. 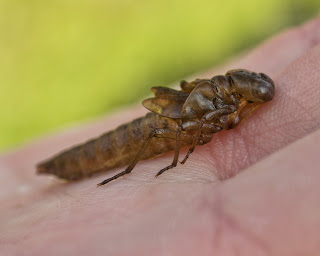 The boardwalk meanders for 3.5km across the bog, but encroaches on only a tiny portion of the whole area - it is vast! As I walked, lizards basking on the warm wood darted off, butterflies looped lazily in the sun while the raptors of the insect world, dragonflies, hunted smaller insect prey. It wasn't until I got to the observation tower at the furthest point of the loop that I was able to get a true sense of the scale of the place - phenomenal! If I hadn't needed to rush back to catch my train I could happily have spent a lot longer, but despite the time constraints I thoroughly enjoyed my visit. I even did my good deed for the day on the return journey, encouraging a frog and a slow worm to safety, when they both seemed determined to become road kill! 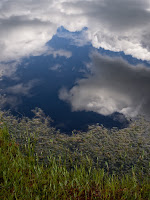 When I got back to Riga I walked the streets for an hour or so, familiarising myself a little with the city, and locating something to eat. This was interesting but to be honest, I was more comfortable and interested miles from a paved road on the Bog than I was in the city. 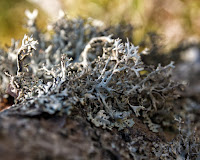 The conference started the next day, and we listened to a whole day of interesting and informative presentations about the conservation and restoration efforts going into wetland habitats stretching from the UK to Russia, and pretty much everywhere in between. These were very educational and encouraging in many instances, but a little disheartening too, hearing both the successes but also the struggles of these organisations to deliver their goals of a healthy natural environment. But, it was a long day in a university lecture theatre - reminiscent of my years of study which now seem a long way behind me! It was the field visits the following day that I was waiting for.

First we visited a restored site; formally milled for peat (harvested believe it or not for pig bedding... I know, thats what I thought too) now reclaimed for nature and turned into a flourishing wetland. It was interesting, the dragonflies were plentiful (always a bonus for me - I love dragonflies!) but otherwise the diversity of species was a little disappointing. I'm used to large expanses of water having birds, usually lots of birds; ducks, geese, gulls, swans, something at least. Here I saw very little bird life, which took me by surprise. At Kemeri Bog a few days before I had noticed the same thing. I saw a few pied wagtails and a pair of Woodchat Shrike - which was great, only seen one before and that was in Spain - but that was it. Back home, I see more birds than that in my tiny, suburban garden. 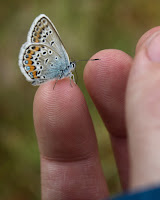 Next on the itinerary was what I had really been waiting for, another raised bog, Sudas-Zviedru Mire (say that three times fast, but don't ask me how to pronounce it because I can't remember) in the Gauja National Park. These raised bogs were the highlight of the trip for me, hands down. Both Kemeri and this one were eye opening - illustrating just how how much we have lost of our 'wild space' in the UK. So many of the places I had previously viewed as wilderness suddenly seemed pretty tame, and modified and ... just sad. Reserves I thought of as reasonably large started to look puny - this was just one of many similar sites and had at least two extra 0's on the end in terms of the land area. 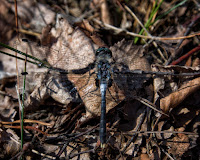 This time there was no boardwalk, we waded (I think that might be the most appropriate term) out through the saturated Sphagnum. Out among the bog pools and stunted trees, we listened to presentations on subjects including the original formation of these habitats, water chemistry, species diversity, ongoing conservation efforts and more, all through radio ear pieces which allowed me to keep listening while engrossed in photographing dragonflies and interesting plants (possibly the best field visit ever!? - who said men can't multi-task!), and trying not to fall into the bog pools. 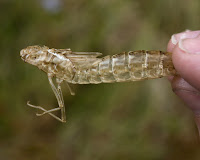 The weather had been threatening rain with a vengeance for a while and as we were preparing to leave it delivered. Still, it seemed an appropriate end to the trip, as without that rain fall where would the bogs be? Certainly not wet enough to entirely soak my boots which, despite several sessions with the hotel hairdryer, were still soaked through when I repacked my luggage and headed for home early the next morning. All in all, it was a great trip, which I thoroughly enjoyed and learned a lot from. I hope there will be a next time as I only scratched the surface of what Latvia has to offer, and if what I saw is anything to go by, it has a LOT to offer if your at all interested in the natural world.

To see all these images and more from my trip to Latvia take a look here at the Flickr album, or take a look at my Instagram @wildguyphoto.