Back to the Peaks 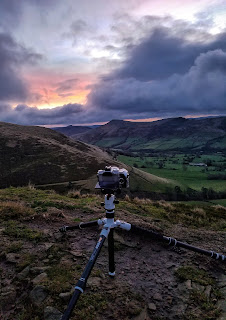 At this time of year the alarm which wakes you for sunrise doesn't have to be early. Of course your chances of actually seeing the sunrise are somewhat diminished by the temperamental British weather, but that makes the nice ones all the more special.

I had taken a day off work and decided that the best way to use my 'adventure day', perhaps ironically, was to go back to my old office; back to the Peak District National Park. I hadn't had a day to myself in the wild for a while and I wanted to make the most of it. To me 'making the most of it' means either out early or out late and with two children waiting for Daddy to come home the preference is always the former. So I set my alarm early enough that I could drive to Edale (which really is where my old office is) and hike up onto Kinder Scout in time to watch the sun rise. 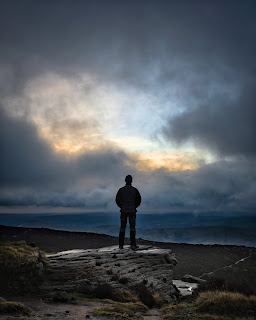 My plan more or less worked. I was a good way up the southern slopes of Kinder with a few minutes to spare until sunrise when I stopped at a vantage point below Ringing Roger. Overlooking Edale and the Great Ridge it was an ideal spot to watch the sun rise at the mouth of the valley, behind Lose Hill. It was great to be out in the fresh air, watching the world waking up for a short winter day - that never gets old. But my view of the sunrise itself was mediocre, there was just a bit too much cloud. As technically I shouldn't have been able to see it at all I didn't feel to complain too much - the weather forecast had been for thick fog. And anyway, this was just the start of my day.

I often forget how narrow the top of Kinder Scout is at this western point; only a few hundred meters from southern edge to northern lip. Having quickly crossed it, hoping across boggy patches and mini streams, passing the trig point on my way. Reaching the edge I turned west along the northern ridge to reach the head of a stream, Blackden Brook, which would lead my back down again. 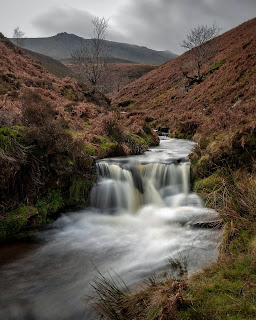 A friend had previously remarked about how scenic Blackden Clough was, with its steeply falling stream and many waterfalls and cascades. Ever since that conversation I had been looking for an opportunity to see it for myself. This was my chance and it didn't disappoint, but like many beautiful spots you have to earn the sight. The descent along the stream required hands as well as feet particularly with the rocks slick from over-night rain.

The tumbling water was clear and strong, the normal peaty darkness of the streams diluted by the freshly fallen. I followed it right down to the valley floor, to the Ashop River. I'd had a relatively crazy plan to make it all the way up to Alport Castles which I quickly realised wasn't going to happen that day - it was an extra 10 km or so, and I while I had been making a reasonable pace, stopping to take photo's and timelapses doesn't cover miles, and I wanted to get back at a reasonable hour to see the family. The long walk would have to wait for another time. 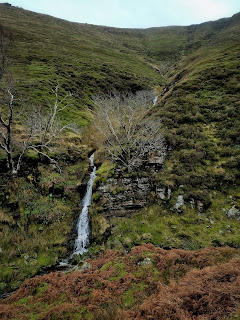 I turned west and followed the river upstream, until I couldn't without getting wet! The valley slopes transitioned from steep to vertical and I backtracked to get up onto a passable grade. At another time of year, and with some company as a safety back up I'd have happily continued in the river itself, but not in December, flying solo and after a decent rainfall. After a few gentle kilometers, numerous dead sheep and dozens more mini-falls and cascades dropping off the steeply rising land to my left I crossed Fairbrook and started heading back up again.

The weather up to this point had been changeable, the fog rolling in and out sporadically. As I started up the clough I could see Fairbrook Naze, and then I couldn't - the low cloud obscuring it from view, before breaking and flooding the hillside with sunlight. By the time I reached the top the fog was pretty well set it and remained for the rest of my time up on Kinder that afternoon. 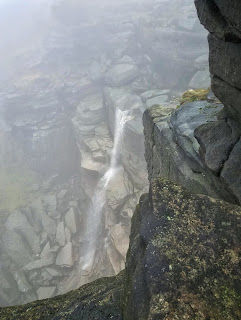 I crossed the plateau from the top of Fairbrook clough across to Kinder Downfall, a route I had taken before, but I was glad of the reassurance that the Ordnance Survey app on my phone gave me that I heading in the right direction as at times I couldn't see more than about 30 or 40 yards in any direction. I could barely see the downfall when I got there, having followed the Kinder river along its shallow gravelly course for a few hundred yards. The contrast between peat soils and sandy, gravel river bed has always stuck out to me - the Kinder plateau is a funny old place. If you haven't ever visited, I highly recommend it. 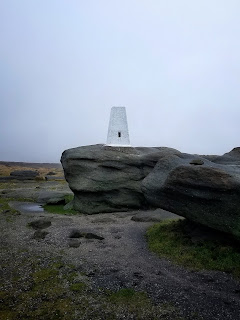 The rest of the trip was really just a return to home. I followed the Pennine way south from the downfall along the edge of the plateau, veering off to pick up the second trig-point of the day and cut off the south-western corner before picking up the path along the southern edge and following past the Woolpacks and Crowden Tower to the head of Grindsbrook Clough. The path down Grindsbrook is a decent and a half, it's one that I have done many times and don't think I'll ever really get tired of it.

Looking back up at Kinder along the flagstone path which leads you back to Edale and civilization I knew I had used my day off well. 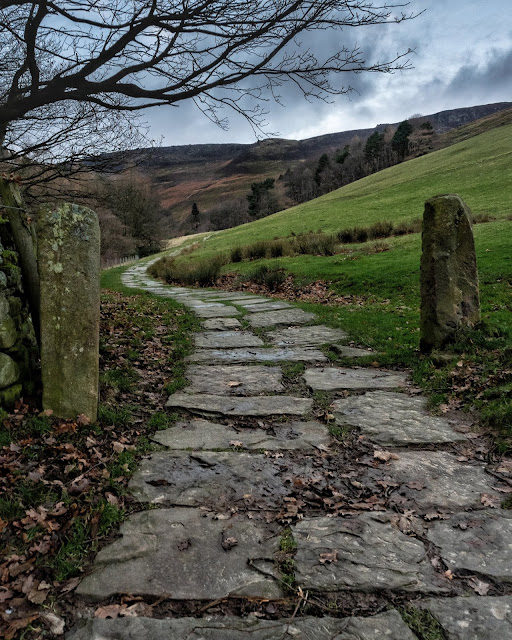