In search of the white hare

"Early January, high on the moors of the Peak District National Park" 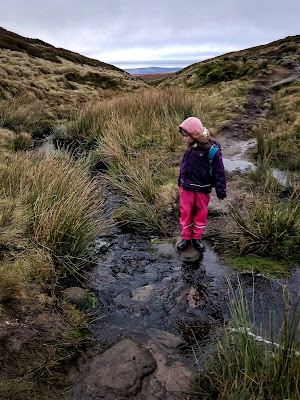 That is unlikely to be a phrase that conjures up images of sunshine and warmth to anyone who knows the Peak District. And I can live with that, but on this particular day I really didn't want it to rain. I was taking my daughter up onto Bleaklow in an attempt to witness a rare sight in the UK, even rarer if you limit your purview to just England. The trip had to be made in winter, our goal is not there to be seen in summer. So back in the Christmas holidays we picked a free Saturday a few weeks away and hoped for the best. The night before the big day the Met Office forecast suggested cool, dull and very windy, but crucially no rain - we were on.

Loaded with warm and waterproof layers, cameras, binoculars and the de rigueur Thermos of hot chocolate, we left home early to complete the 1hr 20min journey before the traffic picked up, and to make the most of the short hours of daylight. Driving through the southern half of the Peak District in the incremental reduction in dullness that passed for sunrise that day, we talked about our goal for the day - white hares.

The only population of mountain hares in England, if you want to see them anywhere else in the mainland UK you're going to Scotland - by no means a problem, but a slightly longer trip. They are native to the UK, but the Peak District population is the result of a reintroduction  with the natively present populations having gone extinct previously. To the untrained eye in summer, relatively easy to confuse with Brown Hares, their lowland, non-native cousin. But in the winter, like a few other upland specialised species, there is no difficulty to determine what you have seen. The mountain hares turn white.


I've been pretty fortunate in my experiences with mountain hares. I used to see them often during the years I worked up on the moors of the Peak District, both in their summer and winter pelage, and have also seen them in Scotland. But my daughter had never seen one. A white hare was the stuff of folklore for her, and this trip was a dream fulfilment mission. No pressure then. 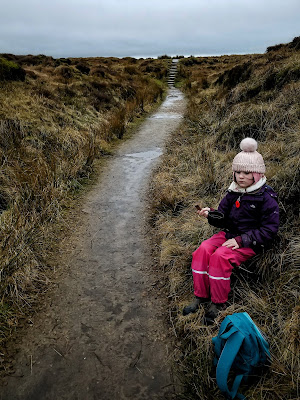 Parking up at the summit of the Snake Pass, we battled our way out of the car in strong winds. The Met Office had nailed it. It really was cool (for a little girl getting perilously close to properly cold with the wind chill!), very dull with a thick blanket of grey cloud just skimming the high point of Kinder to the south and Bleaklow to the north, and very, very windy. Struggle-to-open-the-car-door-into-the-wind, sort of windy. Getting your outer layers on in those conditions is always fun, but we managed it. In the process I realised that I've still got things to learn as father to a young daughter. I hadn't tied her hair back, and it was already whipping around her face before we had even left the car. Whoops. She was not amused, and fair enough. It wasn't quite the start to the outing I had hoped for.

North was our direction of travel, our backs more or less to the wind to begin with. A wind that intensified as we followed the Pennine Way into its sunken channel, a natural and highly effective wind tunnel. Buffeted by the wind and out of sight of the surrounding moorlands we may not have been able to see any hares, but they were also relatively unlikely to catch sight of us. As we progressed further from the Snake Pass, we raised ourselves above the parapet occasionally to scan the moors with our binoculars - trench warfare. At one of these scouting sessions I spotted a blob of white far off on the edge of a depressions in the peat. Was it a hare!? No, it was a piece of a sheep, the rest obscured further into the depression. Disappointing but it was still early. We had as long as we wanted, or as long as a small person could put up with, whichever arrived first. 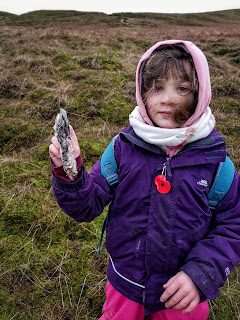 On our route up to Hern Clough we spotted hare droppings and frequently used runs through the cotton grass, heard the distinctive, staccato cackle of red grouse and the acorn symbols of the Pennine Way trail markers.  We were definitely on the right track, in more ways that one on this occasion.

The wind continued to blow us toward our intended destination, but it was also still mercilessly blowing hair into a not-as-smiley face, chilling little fingers and a little nose. Despite being wrapped up to the eye balls there was a very real risk that this wind, and the resulting cold was putting a downer on our little adventure. The trip, intended to fulfill a wish and ingrain positive, outdoor experiences, was at risk of becoming a negative, "why did we do this" sort of a trip.

Now of course, when out of doors with little people, versatility is the name of the game, and I was prepared for such an eventuality. On reaching Hern Clough, we turned and followed it downstream in an attempt to drop out of the wind. It didn't work quite as well as hoped... but we did eventually find a sheltered spot round a meander and behind a shoulder of the hillside where we perched for a bite to eat and some of the hot chocolate, a guaranteed spirit lifter. Now working on a circular route outlook rather than the original out and back route we were covering different ground, and were able to spy out into the dead ground of the stream valley ahead of us as we went. Still nothing. 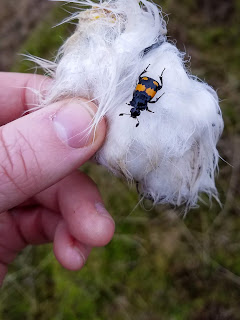 As we reached a turning point in our route, literally, we needed to turn right and go back up hill, we found (drum roll please) some pieces of a white hair. Yep, pieces. A foot, a tail and a few other bones and bits of fur. Granted it was not quite what we had hoped for, but it was exciting enough to put a smile on a cold little face, and a smile on my face too. Not just because my daughter was a bit happier, but also because nestled into what was left of the tail was a sexton beetle, Necrophorus vespilloides, to be specific. In case you are wondering why a beetle which feeds on dead stuff puts a smile on my face, I wrote my Masters dissertation on them, so they bring back happy (and smelly) memories. Good times.

This finding, and the assurance that we were now heading for the car, put a little extra vigour into our pace but we still had a little way to go, and now had no formal path to follow. Navigation wasn't an issue, it was an area I knew and we had good visibility to pick out of reference points - the problem with no path was the trips and slips which result from walking through tall heather. We followed a fence line, and the sheep run that paralleled it, continuing to scout out for a blob of white. a few spells of sitting down, and an eventual caving in to the request for a ride on my shoulders (oh my poor aching back!) we were back in sight of the car in the distance. Surely now the motivation to keep going would be there, with the original goal of the trip now a distinct second place to getting back to the warmth of the car. Until.

"HARE!!" There it was, the legend incarnate. Hunched in the lee of a peat hag, white fur in striking contrast to the black peat, stationary and staring, just like us. We broke first, reaching for cameras, but it was faster out of the blocks and was up and gone. We watched it go and smiled. Mission accomplished. The rest of the journey was irrelevant. We had seen the white hare. Memory banked, positivity restored, foundation for future wildlife adventures reinforced. The magic rabbit had been pulled out of the hat in the nick of time, and saved the day.