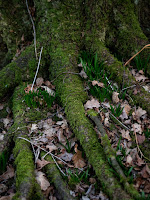 I think it is probably on every parents wish list to spend more quality time with their children, time where other distractions can be set aside and just being a parent and a child can be the main focus, even if only for a short time.

We are exactly the same, and so earlier this week we decided one morning (because the weather was beautiful again and it can't last forever in February) that as soon as I was home from work and our oldest daughter was home from her school club, that we would head out for a walk to our local woods. And we did exactly that. 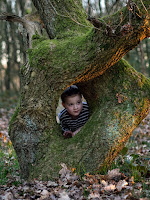 Our woods are a under-appreciated gem, but I'll write more about them another time. The key thing for this short post is that they are easy walking distance from our home and large enough than when in amongst the trees you could pretty easily imagine that you weren't really surrounding by houses and industrial estates.


The sun was already getting low when we left and provided and beautiful, warm back-light to our adventure. Not that warmth was missing, despite being February it was well into double figures Celsius and none of us needed coats or even jumpers. 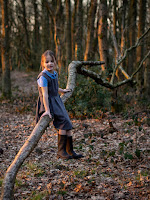 Wellies were worn of course, mud was jumped in and squelched, the little stream was splashed in, roots were battled with, trees climbed, bird song listened too, tree buds admired, early flowers appreciated, dead leaves crunched, some paths followed and others ignored in favour of the 'adventure route', steps climbed, sticks (swords) were found and battles fought, ecological investigations were initiated ("What dug this hole"? / "What left this footprint"? / "What flower will this be"?) and fresh air and exercise were enjoyed by all. Phew, it was full on small-child adventuring! 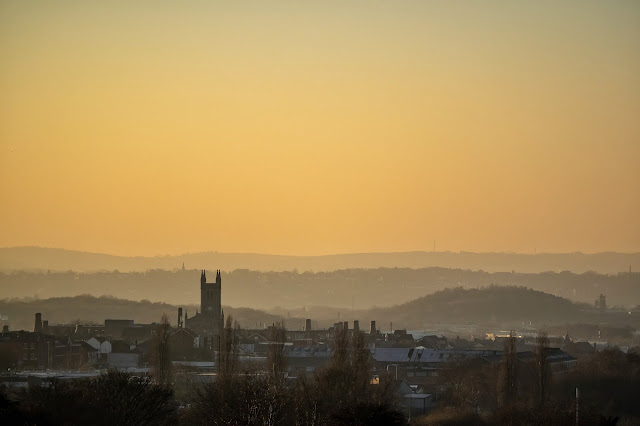 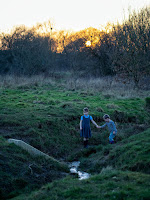 Despite the fun the calls for home came and eventually, although by a pretty circuitous route, we pointed our noses for home and left the woods. But there was one more little treat before we concluded our family micro-adventure that day. Between the woods and home there is a point where we can look out to the west across the city. And being a gorgeous day without a cloud in the sky the golden orange orb of the sun was perched teetering on the hazy horizon. We waited and watched as it slipped out of view, eventually leaving just a nail clipping of brightness before vanishing entirely. 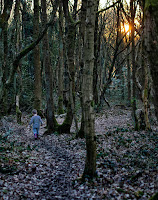 Then it was home, dinner, pyjamas, off to a church meeting for me, bed time for the little people - back to normal life. But it was a great escape while it lasted.

We are determined this year to make more of these wild moments for us as a family, particularly in those woods. The signs of spring are already well on the way and what better way for the children to appreciate the seasons specifically and the natural world generally than to witness it change on their doorstep week by week.

More wild moments of this ilk to follow in weeks and months to come.